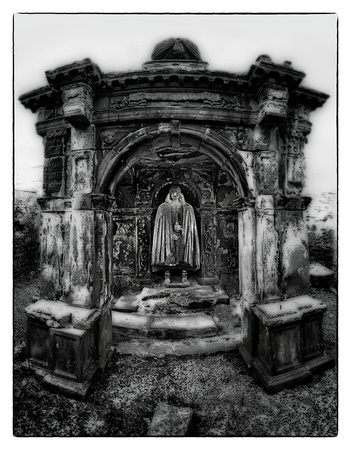 The cloaked figure of the 17th-century laird, John Bayne of Pitcarlie, is probably not one you would wish to encounter on a moonlit night in the graveyard of Greyfriars.

Bayne was a Writer to the Signet [an Edinburgh lawyer] in the middle of the 17th century. The mausoleum was built in 1684. He left money to provide bursaries for students at the University, known at that time as the College of Edinburgh.
It is sometimes believed that he was appointed Receiver General by Cromwell but there are references to suggest that an Englishman, John Baines, a military man, was actually appointed to this post.


Greyfriars Kirkyard is the graveyard surrounding Greyfriars Kirk in Edinburgh, Scotland. It is located at the southern edge of the Old Town, adjacent to George Heriot's School. Burials have taken place since the late 16th century, and a number of notable Edinburgh residents are interred here.
Chris Blade
Powered by ZENFOLIO User Agreement
Cancel
Continue