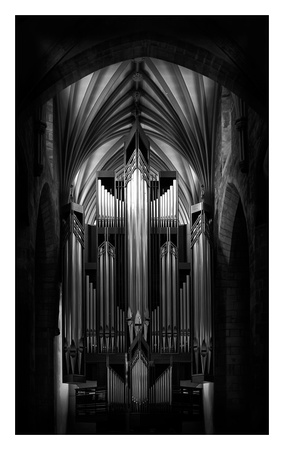 
The organ was built in 1992 by the Austrian firm of Rieger Orgelbau, in consultation with Herrick Bunney and Peter Hurford. The instrument, with its distinctive case of Austrian oak designed by Douglas Laird, stands in the South Transept.
The 1992 organ was completely new, except for the Pedal Open Wood 16' and the Bombarde 32' which were retained from the previous instrument (Willis III 1940). In addition, the lowest seven pipes of the old 32' Double Open Wood are mounted at the back of the case and form the bass of the Untersatz 32' - the remaining metal pipes of which form part of the façade.


The instrument possesses mechanical key and stop action. There are 57 speaking stops spread over three manual divisions and the pedal division. The louvred top of the central pipe tower contains a chromatic ring of 37 Whitechapel bells, which are playable from the Swell manual and from the Pedal.
Chris Blade
Powered by ZENFOLIO User Agreement
Cancel
Continue