Visitors 4112
224 photos
Chris Blade & Katya Filmus produced a series of iconic crystal glass stag head sculptures to crown new point of sale display gondolas, as part of a £1M re-branding exercise, for Glenfiddich. It is anticipated that up to 21 of these exquisite casts will be unveiled at major airports worldwide.

Ian Taylor, Global Marketing Manger for Travel Retail at William Grant & Sons said: "From the outset we wanted to create a piece that was far closer to art than to retail furniture. As the project progressed it became obvious that we needed to work with the very best glass team available, and that meant Katya and Chris."

The first Crystal Head graces Heathrow's Terminal 5 and is the 'jewel in the crown' of Glenfiddich's re-branded travel retail display. Other cast stag heads have been seen as far afield as Dubai, Hong Kong, New York, Frankfurt, Singapore, Chicago and many other airports. Keep your eyes open!
The primary sculpting was done at Windsor Workshops, London.

Each Crystal Head uses 50kg of the finest 45% lead crystal glass originating from Gaffer Glass in New Zealand. The antlers are made separately & bonded after the sculpture has received its final polish in hot hydrofloric & sulphuric acid.

The photos essay illustrates the production methods.
The Lost Wax process was selected as the most appropriate process for this project. Moulds are made using plaster & silica, reinforced with layers of wire. The glass is then melted into the mould in a kiln. It must then be cooled very slowly. For this project the annealing cycle was in excess of 6 weeks.

Photo essays of other casting projects may be seen by following links below: 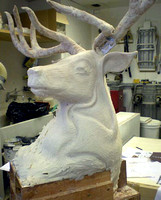 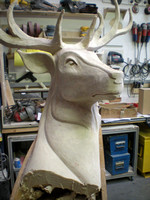 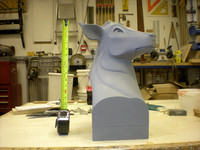 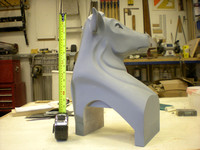