This beautiful bowl is the work of artist Halima Cassell. She usually makes her work in ceramic but for the first time has moved into cast lead crystal. To achieve this end she approached Chris Blade, Head of Enterprise and Commissioning at the National Glass Centre at the University of Sunderland, England to translate her design into glass. the National Glass Centre Studio utilises some of the United Kindom's most talented craftspeople and artists in the production of works such as this.

Working from a ceramic master two silicone moulds were made frfom the original in order for an identical replica of the bowl to be made in wax. The wax was then invested in a heat resistant mould. The mould was heated to remove the wax and the lead crystal was melted into the void. After an extensive cooling and annealing period the mould was broken away from the cast revealing the bowl.

Considerable grinding and polishing by hand was required to smooth the surface before submerging the bowl in a mixture of hydrofloric and sulphuric acid to bring a high polish to the work. 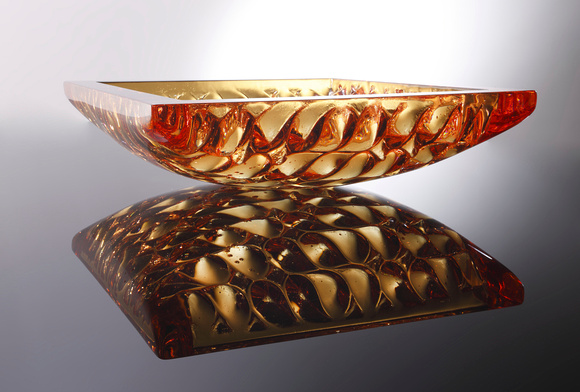