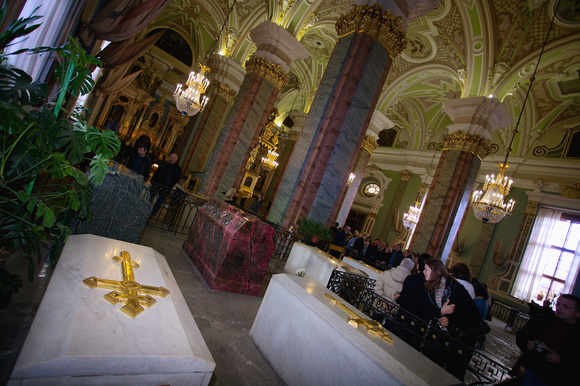 The cathedral is dedicated to Saints Peter and Paul, the patron saints of the fortress (Saint Peter being the patron saint of the city). The current cathedral is the second one on the site. The first, built soon after Peter's founding of the city, was consecrated by Archbishop Iov of Novgorod the Great in April 1704.
The current building, the first stone church in St. Petersburg, was designed by Trezzini and built between 1712 and 1733. Its golden spire reaches a height of 404 feet and features at its top an angel holding a cross. This angel is one of the most important symbols of St. Petersburg.


The cathedral houses the remains of almost all the Russian Emperors and Empresses from Peter the Great to Nicholas II and his family who were finally laid to rest in July 1998. Also was Catherine the Great, Empress of Russia for 34 years. (Of the post-Petrine rulers, only Peter II and Ivan VI are not buried here. Peter II is in the Cathedral of Michael the Archangel in the Moscow Kremlin. Ivan VI was executed and buried in the fortress of Shlisselburg